ICOs: Knowing the legit from the lemons It was fall 2017 when everyone was still buzzing from the shock and awe of Bitcoin’s meteoric rise. The sharp ascent of the price looked unstoppable, paving the way for many other Initial Coin Offering (ICO) exercises.

Despite the stardom of Bitcoin and a host of seemingly celestial cryptocurrencies such as Ethereum and Ripple, investors are starting to get cold feet at many projects that tried to raise tens or even hundreds of millions of dollars for seemingly no good reason. Compounding the perception of greed, many early backers were given massive presale bonuses which were then cashed out almost immediately after the tokens became tradeable, which kept token prices down.

Then came Confido, a supposed startup that developed smart contracts to provide escrow payments with shipment tracking features. Unlike traditional escrows which are provided by a third party, a smart contract automatically executes the terms of the agreement through lines written directly into the code.

It was a humble outfit which stated that it only needed US$400,000.

Reuben Yap, project steward of Zcoin and a keen observer of ICOs said: “In a time where ICOs were raising tens of millions of dollars and in some cases hundreds of millions of dollars (Tezos, Filecoin, Sirin Labs), Confido’s hard cap raise of US$400,000 was refreshing to investors and added a lot of credibility that this was a legit project that was only raising what it needed.

“It was trying to solve a problem that was easy to understand and its claims that it was working with other partners such as Kleros and Chainlink further added credibility.”

In just two weeks, Confido managed to garner US$375,000 from the ICO with the tokens trading for as much as US$1.20. After that, the team appeared to have vanished into thin air. They left a statement on their official website as well as a message on the Confido subreddit indicating they have faced legal issues and decided to stop the development. Soon, Confido’s website, Twitter account, Facebook page and the team members’ social media accounts were deleted.

A classic case of “hit and run”, Confido is just one of the many cryptocurrency scams to hit the market.

Differentiating an ICO and IPO

With ICOs hitting a fever pitch in 2018, as many as 1,253 ICO exercises have raised US$7.8bil during the bumper year alone. This came in parallel with 1,359 IPOs launched with proceeds of US$204.8bil – a remarkable feat for cryptocurrencies that were unheard of and not in existence before 2014.

Although IPOs are still the gold standard in retail investment, it is not hard to see the allure of the ICO from the perspective of a layman consumer. IPOs – in all their credibility, governance mechanisms, track record and legal coverage – are still clunky and skewed toward institutional investors such as banks.

The nature of ICOs, however, is fluid and robust. It does not take much to participate in an ICO as long as an investor has cryptocurrencies to begin with. Back in the heyday of ICOs, there were few regulations (for better or for worse) and no legal protection for investors. An ICO entrepreneur may publish a white paper detailing the purpose and details of the exercise, and even then, it could very well be fabricated.

The free-for-all finally came to a screeching halt when governments around the world took notice of the phenomenon, with different regulatory responses ranging from welcoming with prudence to outright prohibition. Singapore, Switzerland and Malta have some of the most progressive stances on cryptocurrencies. In November 2018, the Monetary Authority of Singapore announced that they will grant licences to ventures that can justify their business prospects after a stint in a “regulatory sandbox.” As a result, Singapore saw 581 ICOs, raising US$2.5bil.

“Huge amounts of money have been raised for ICOs and blockchain-related investments and Singapore’s permissive stance has made it the preferred location to incorporate legal entities given its geographical proximity to the Asian markets and still being considerably cheaper than its main competitor Zug, in Switzerland,” said Yap of ZCoin.

He added that being cryptocurrency and ICO-friendly also makes Singapore the prime destination for the most important blockchain and cryptocurrency conferences in Asia, strengthening its position as a financial and technological hub.

In contrast, China and South Korea have strictly banned ICOs since September 2017. The biggest test for regulators is whether tokens are classified as securities, which would require strict disclosure and compliance.

It appears that Malaysia has adopted this school of thought with the Securities Commission clamping down on local ICO projects in 2018. It has promised that a regulatory framework will be drawn up despite pushing the deadline several times, undoubtedly putting many ICOs on hold, if they have not already moved to Singapore.

Knowing where the money goes

Does that mean that an IPO is a better bet? Not necessarily. Although almost 56% of crypto startups die within four months after an ICO, the chance of failure is not unreasonably high compared to that of an early stage startup. The reasons, like those for a startup at ideation stage, are varied – poor product development, challenges in execution and operationalisation, unsuitable business models.

Similarly, ICO entrepreneurs have to pivot and scale their projects until they find the right product-market fit and the right business model. And once they do, the windfall could be immense.
Research by the Asia School of Business provides a glimpse into the murky world of ICOs with a guide to decrypting coin winners and differentiating the lemons from legitimate projects.

The world-class business school based in Kuala Lumpur is a collaboration between Bank Negara Malaysia and Massachusetts Institute of Technology Sloan School of Management. Founded in 2015, it has become a training ground for industry-ready visionaries, highly qualified policy makers and aspiring central bankers. 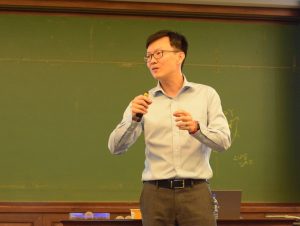 In a paper co-authored together with Xin Deng, Associate Professor at the School of Finance at Shanghai University of Finance and Economics and Zhengting Zhong, a PhD student at Columbia Business School, he examines the three fundamental factors that positively affect ICO deal completion, ICO listing status and the amount of raised capital.

“We find that the overall quality of disclosure, governance, and the management team increase the likelihood of ICO success, measured as ICO deal completion, ICO listing status, and the amount of raised capital,” the authors said.

The paper also cautioned that successful deal completion in itself does not necessarily legitimise a project.

“A project’s legitimacy depends on whether the founding team members make progress on the development of their purported applications or platforms,” they said.

“In spite of their notoriety, ICOs are not necessarily and intrinsically bad. Unfortunately, legitimate financing needs are easily intermingled with fraudulent projects in the absence of regulation,” they added.

As with parking money in any instrument, investors are urged to exercise caution and due diligence. Even traditional investment avenues like an IPO can go up in smoke when corporations go bankrupt.
In a space with no regulations, such as the ICO markets pre-2018, the market tends to correct themselves and self-regulate. In the case of Confido, while a good number of investors will likely not see their money back, the Chinese cryptocurrency exchange that listed the contract for differences token issued by Confido is reimbursing investors.

In a bid to demonstrate that trading platforms are willing to go to great lengths to earn trust and make a successful impact, KuCoin exchange has stated: “KuCoin is going to trade users’ purchase net value at the rate of 0.0000038 BTC (approximately US$0.03)/CFD and directly deposit into users’ accounts.”

Recently, attorneys claiming to represent Confido have also posted messages on the resurrected website stating that they are in the process of refunding investors.

That probably still will not stop thousands of investors from losing money to scams every day, but in a whole new world of fintech, age-old common sense will still rule the day.

← Previous Next →
Back
x