The entrepreneurship journey begins at 10, not 25 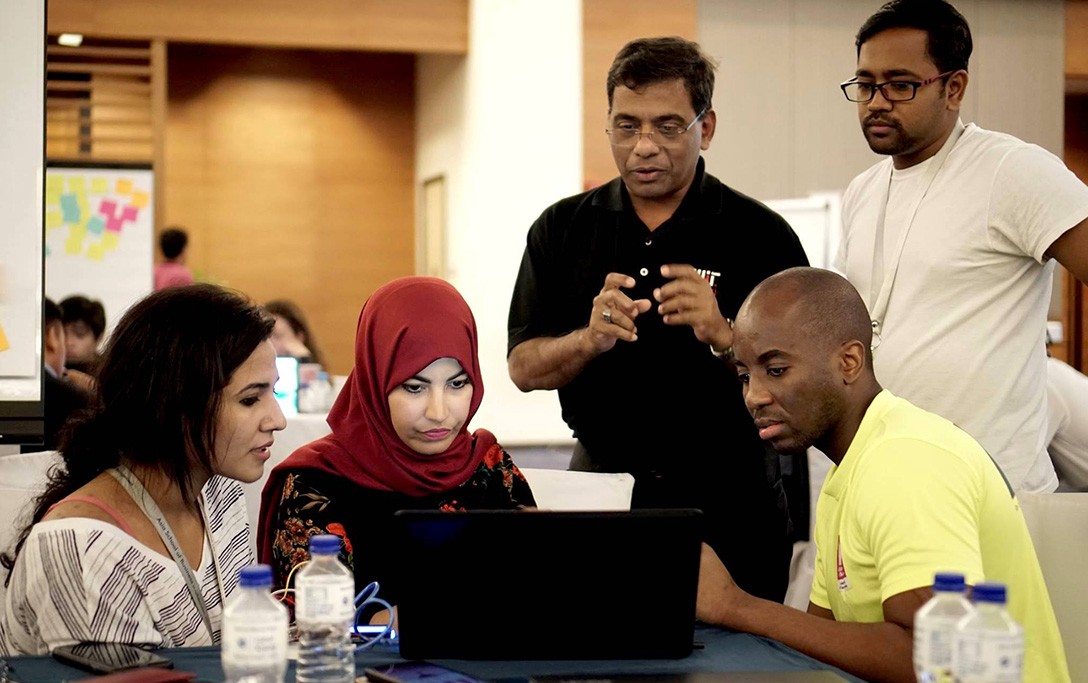 Professor Rajesh Nair (center) is a man on a mission “to reach one million students and create 100,000 entrepreneurs in 10 years”. In conjunction with Malaysian Global Innovation and Creativity Centre’s (MaGIC’s) Innovation Week, he delivered a talk entitled “Creating 10x Entrepreneurs in the Future”.

Rajesh is a professor of practice and senior lecturer of innovation and entrepreneurship at Asia School of Business, a new business school in collaboration with MIT Sloan located within Bank Negara Malaysia’s building.

Listening to him speak, his passion to uplift student communities and impart his ideas are clear. Born into humble beginnings in a small village in India, Rajesh’s first exposure to electronics happened when he took his radio to a repairman when he was 12.

His inquisitive nature was piqued, “Before then, I thought little people lived inside the radio singing to us daily.” It was a new beginning for Rajesh. In the next few days, the repairman taught him the basics of electronics. Those few days are a lifelong gift Rajesh will always cherish, “It changed my life.”

As a young adult, he pursued his Bachelors of Engineering and a masters degree in electronic product design at the Indian Institute of Science. Keen on ensuring his product designs were manufacturable, Rajesh enrolled in the University of Massachusetts Amherst for a masters in manufacturing engineering.

After some years of working in product design and even founding a startup, Rajesh’s latest qualification is a masters of Science in system design and management from the Massachusetts Institute of Technology. This is where he began seriously thinking about the problem of creating more entrepreneurs.

“Here I was – this kid from a small village who just happened to have the right stimuli at the right time,” said Rajesh, believing that it spurred him on and brought him to where he is today.

“There are millions of kids around the world who may not get the right stimuli.” With this in mind, Rajesh set out on a path to create a process that provides students with the right input for entrepreneurship.

He truly believes that the number of entrepreneurs in any community can be multiplied. Many entrepreneurship programs around the world are carried out in a top-down fashion which is not the most effective way to create entrepreneurs.

According to Rajesh, the founders and startups that come from these programs are given funding and other resources. Despite this, they often fail. “Because it’s the first time they’re ever doing it. They’re just about learning to walk.”

By giving funds and having them start companies, these founders are not given a chance to learn and fail. Instead, Rajesh thinks the focus should be on exposing kids to entrepreneurship and inspiring them.

“Often these programs focus on 25-year-old people. I believe it should be done when they’re 10-years-old because to master these things in your 20s – the rate of learning is pretty steep,” he shares.

Rajesh further explains that once someone becomes an entrepreneur, there is a lot of support given in the form of funding, policies and training. “The bottleneck lies in the conversion point from students to aspiring entrepreneurs.”

Rajesh describes this stage as the pre-entrepreneurship stage where students experience failure. “Every time you fail, you have hit the edge of your competence. Once you master it, you expand your zone of competence,” he said.

Rajesh stresses the importance of failure as a learning process, “That is the feedback that the world gives you.”

FROM MAKER TO INNOVATOR

Drawing on his own past experience, he attempted to replicate his learning and came up with a framework starting with the maker stage. “The whole idea is to design, make, play. Don’t try to solve any world problems,” he said on the basis of how a child’s creativity works.

Surpassing the maker stage, the next step is the innovator stage where problems are found and solved through design thinking. At this stage, empathy is key.

Rajesh explains: “You cannot sit in an air-conditioned room and create a solution for farmers in Sabah.” Promoting immersion and enabling his students to fully appreciate problems, he takes them to meet farmer and fishermen communities and patients in hospitals, all the while armed with tools and 3D printers.

Nonetheless, Rajesh knows this is no one-man-show, “Mentors are the most critical missing link.”

Currently, he is working on training young adults from the community to teach school students in his Zero2Maker programs.

Even if these students do not embark on entrepreneurship journeys, Rajesh believes they would still gain life-changing knowledge. “These students would have still built valuable skills that would help them in their life.”

This article was originally published on Digital News Asia’s website.

Want to learn more about ASB? Download our brochure here.